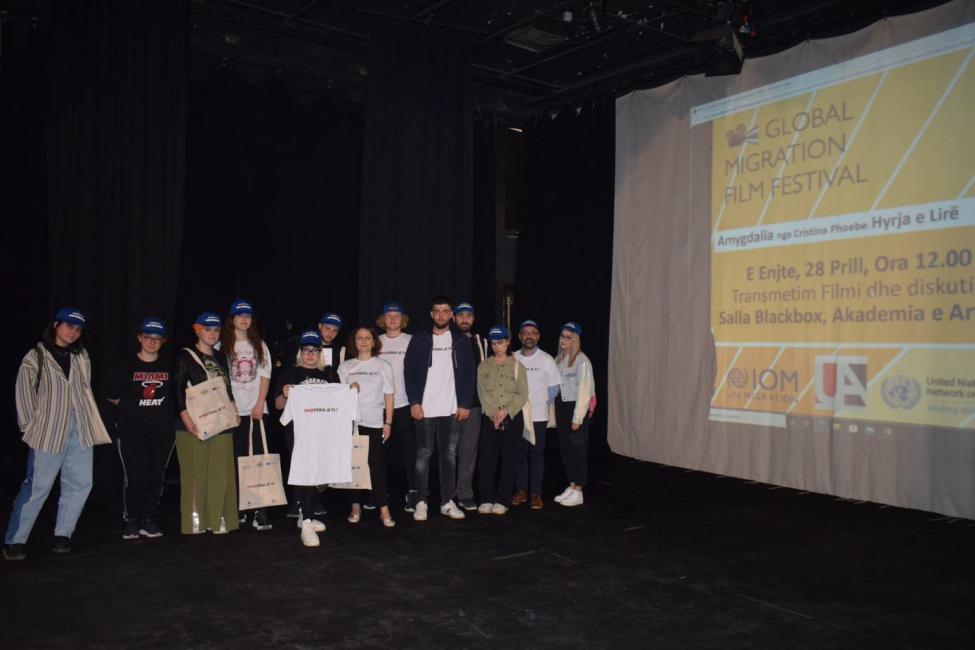 "Can a film be a nest"? the answer is YES if it tells true stories that each of us may live. One such movie is "Amygdaliá”, written and directed by Cristina Phoebe Thomopulos, a filmmaker based in Greece and educated in New York, building on her personal experience as a foreigner in Greece and that of other four women that share their fragmented memories of what it means to be a foreigner in a land that often resembles a Mediterranean postcard.

"Amygdaliá" is a tree that blooms at the beginning of spring. It is also the word that haunts one of the film narrators as a little girl when she has just arrived in Greece.

The movie was screened by IOM Albania, in the "BlackBox" Hall of the University of Arts, Tirana, Albania for an audience of film and other art students, on 28 April 2022.

The screening was organized in the framework of the IOM’s Global Migration Film Festival, as a joint efforts of the UN Migration Network in Albania. "Amygdaliá" was one of the five movies selected from an international jury among 800 submissions to be screened in various events held worldwide.

Genci Pjetri, Programme Coordinator & Development at IOM Albania presented the activities of IOM in Albania to the audience, highlighting the importance of well-governed migration for the whole society. “Albania is a country with almost one-third of the population abroad, and in this way, migration touches us all” he stressed.

The screening was also used as an opportunity to share with the participants information about Albania is YOU! Shqipëria je TI! national awareness campaign, implemented by IOM, aims to inform citizens and especially young people about the risks of irregular migration so that everyone is well informed about their choice.

In this film people, places and things come together and part ways as in a dream. The natural world becomes a place of refuge and companionship for a group of women who try to reassert their identities and invent a new language, out of landscapes and gestures in contemporary Greece.

The script is based on real-life experiences of eight migrants in Greece, coming from different parts of the world, developed and underdeveloped. One of the masterfully told stories, in the movie was that of Gerta Dyle, an Albanian migrant who migrated to Greece at the age of seven. She was part of the movie crew and joined the screening to share with the audience some of the details of the realization of the film, and how the idea took shape starting from the personal experiences of the filmmaker. She also shared her experience (as well as stereotypes) as a migrant child that were reflected in the film. She said: “When I was a child when we came back from vacations, the teacher would ask us where we went for vacations. Most would say in this or that Greek island, some would say France or Spain, and I said Albania. Classmates would turn to me, some of them looking estranged and some of them with pity”.

After the screening of the film, the audience, engaged in discussions that were sparked by different moments in the movie. For example, a quote that inspired discussions was one of the narrators saying: “a foreigner has a lot to face. Like running a race but with more hurdles than anyone else.” Participants discussed migration in the Albanian reality in general but also from a personal point of view on new trends and patterns.

Capacity Building workshop for the implementation of National Strategy on Migration

Subscribe to IOM newsletter to receive the latest news and stories about migration.